Effective Communication is Key in Relationships… and ESL Design!

COMRATE™, the co-simulation solution developed by Aldec and Agilent is a lot like “couples-therapy” that can help get your digital blocks talking to the rest of your model-based design.

To illustrate, let’s take a look at a very basic model-level design and think about it from design-under-test perspective (i.e., what are the challenges associated with verifying this DUT):

This is a simple  modulator system that utilizes the fixed-point and HDL models.

So what are the challenges in verifying a multirate design like this one?

Alright, communication was the obvious one… a simulation/verification environment is required to help stitch together different levels of abstraction, enabling the model-level and digital/RTL blocks to talk to each other. An environment like the one presented in the following diagram: 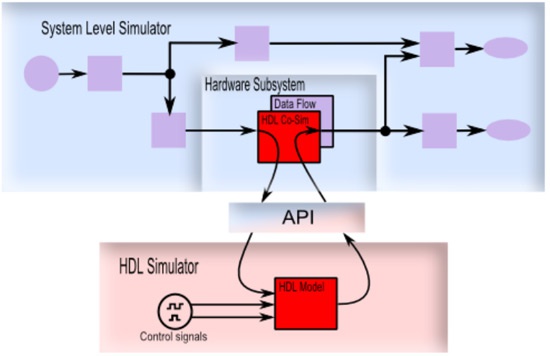 But there is another, less obvious pitfall due to the nature of event-driven (HDL) and dataflow (system-level) simulation schemes. Consider this:

Therefore, the following “back in time” scenario is possible for a given point of simulation in a multirate system:

These fundamentally different execution schemes impose constraints on the verification environment which therefore must combine a multirate system-level simulator (utilizing a non-chronological execution scheme) with an HDL simulator (which cannot move backwards by definition). On top of this, efficient debugging tools are required to visualize the simulation results…

We have just scratched the surface on this topic. In other words, this was just the trailer! To see the entire “movie” I invite you to download our newest white paper, Verification of Multirate Systems with Multiple Digital Blocks, authored by Arkadiusz Golec, Aldec R&D Engineer and Technologist.

This paper outlines how COMRATE engine can help with the challenge of simulating multirate system-level designs with multiple digital blocks. It contains  practical examples with negative simulation delta time and presentation of relative time domains in traditional timing waveform. The paper also explains how SystemVue/Riviera-PRO users are able to take their designs from concept to hardware faster, using the co-simulation flow to verify the digital hardware portions directly inside the system-level environment.

For more on the Aldec/Agilent co-simulation interface, visit DSP and RF Co-Simulation Application.

Dmitry Melnik is a product manager at Aldec responsible for ALINT™ and Riviera-PRO™ product lines. He has over 8 years of digital design and verification experience, including previous roles in corporate and field applications, technical marketing, and software development with R&D divisions of Aldec in Europe. Dmitry holds an M.S. in Computer Systems from Kharkiv National University of Radio Electronics, Ukraine.