When capturing items, whether they exist in Microsoft Word documents or source code, there is a need for telling a tool what patterns to search for during a parsing phase. These patterns are most often described by a regular expression (regex) which are a sequence of characters that make up a search pattern. By providing this search pattern to a parser, that tool can then recognize tags within documents, allowing it to pull specific instances of design or other types of requirements from different documents. In fact, this type of character matching is implemented in Spec-TRACERв„ў, and the purpose of this document will be to provide an introduction on using and forming your own search patterns when capturing design items.

Regular expressions work by matching characters to a given pattern. This pattern is composed of the letters, numbers, or symbols of the term to be matched, and is especially simple when matching a single, defined term. For example, to match a specific phrase, the regex would simply be that phase. Suppose we have the string "Hello, World!", to match the first word, we would simply use the regex "Hello". This is easy when wanting to match simple and known patterns, however, when applied to variable terms such as the multiple tags you'd find for items codes within requirement documents or source code, there's a need for more complex pattern matching.

NOTE: Regex syntax can vary among different engines. This document covers the more widely used Perl flavor of regex, which is the accepted syntax within Spec-TRACER.

While the classes above match any characters from within their respective groups anywhere in a string, it is often necessary to specify where in a string that a regex should match. This type of specification is performed by anchors. An example of where this might be particularly useful in terms of item capture is if certain item codes are mentioned in text in places other than where that code acts as an identifier. Without anchors, a parser would match an item code at any instance, and can lead to issues of incomplete or duplicate items being captured. It is therefore useful to specify that some matches should occur at the beginning of strings, or perhaps at the end of a line. The following table characterizes two of the most common anchors:

In this case, both example regex were written to match any 6 consecutive characters as indicated by the 6 wildcards. The difference between the two, however, were the additional anchors present in both examples. In the case where the first six characters were matched from our example string, the '^' anchor was used, and this was included before the search term. To match the last six characters, the '$' anchor was used instead and it was present at the end of the search term.

In some cases, the length of target codes is unknown, or can vary in size. The search patterns shown so far have all worked on a one-to-one type of match, and would not be able to handle such variability by themselves. For such cases, quantifiers may be used to specify how many times a certain element within a search pattern should occur. Quantifiers may be used to limit or expand the constraints of a particular search pattern, and they are implemented in a number of ways:

As shown, quantifiers allow shorter regex while also providing the flexibility of capturing variable length terms. Instead of having to write out as many digit "\d" search terms as required, they can instead by specified by a simple quantifying pattern either through the built in quantifiers (*, +, and ?) or through the more customizable curly bracket-type syntax. In either case, these quantifiers will be necessary in those item or tag codes which might not share uniform length.

As we've seen in previous examples, a number of special characters are used for different classes, anchors, or quantifiers. This means searching for those particular characters within a string isn't as simple as including them within a search term as they will be parsed using their special behaviors. In such cases that these symbols are to be searched, they can be included via a character escape, meaning preceded by a simple backslash '\'. Any special character preceded by a backslash will be parsed as that character alone, and will provide no special behavior. Of course the inverse of this has been shown as well. In certain cases that normal characters (such as letters) are preceded by a backslash, they may take on special behavior, such as "\d" matching any single digit character.

Parsing With Regex in Spec-TRACER

While there is much more to regular expressions such as additional escape characters, substitutions, grouping, alternation, and other miscellaneous constructs, the basics covered here can provide powerful search terms for capturing the types of item codes used for traceability. Looking at some of the examples included in Spec-TRACER, we can see how regex is used within the tool's different parsers to match certain tags within different files.

Following the "Traceability Tutorials using Parsers" guide within the user manual, we can set up the MS Word Parser like so to capture our concept design codes from a Microsoft Word document: 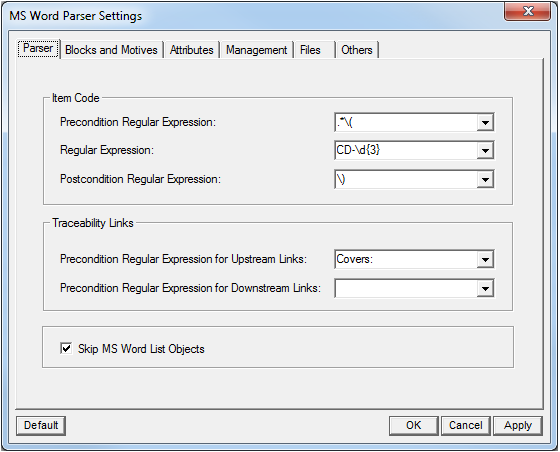 Notice that the parser here has a number of places for including different regular expressions. For simply capturing the item code, we can look at the first section and see the main regular expression provided to the parser is "CD-\d{3}". As you might recall, this search pattern will match the text "CD-" exactly, and then match three more digit-type characters. As such, "CD-002" will be included as a match within the document.

Figure 2. Concept Design item as it appears within the document.

NOTE: In the case that either precondition or postcondition are empty, they can act as anchors without having to add the relevant character to the main regex. For example, an empty precondition will act as a '^' at the beginning of your regular expressions, while an empty postcondition will act as a '$' at the end of your regular expression. As such, these anchors are not necessary when forming your regex, but their behavior still persists.

Not only can regular expressions be used to match those item codes, but they are also used to automatically set up traceability links, as shown within the parser settings. For that particular configuration, any codes or tags appearing after the matched "Covers:" term will automatically be added to an item's upstream links.

Similarly, we can see a similar case of regular expressions used within the Source Code Parser: 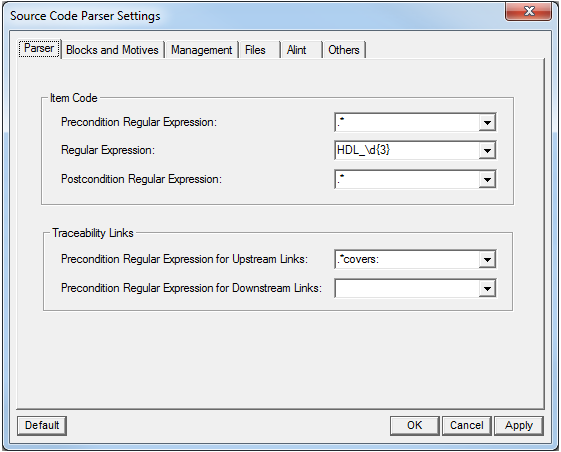 Looking at these settings, we can see that this regular expression will match any text "HDL_" followed by 3 digits. Because these tags are provided as comments, we can simply provide wildcards for our pre and postconditions.

Looking at the source code, we can see HDL_005 will be captured for this particular configuration. Notice that this time the tags are set up to encapsulate a certain part of the code by using BEGIN and END keywords. These keywords are recognized automatically and shall not be included in regular expression.

Overall, regular expressions are necessary when it comes to parsing and matching the different item codes within requirements documents and source code files. Through various special characters and constructs, regex can be formed to match any syntax used for tagging content for a simple and convenient means of automatically detecting and parsing items for traceability.