In recent years, programmable logic devices have become key components in implementing high performance digital signal processing (DSP) systems, especially in the areas of digital communications, networking, video, and imaging. However, DSP designers conversant with programming in C or assembly language are often unfamiliar with digital designs that use hardware description languages (HDLs) such as VHDL or Verilog. Although VHDL provides many high level abstractions and language constructs for simulation, its synthesizable subset is far too restrictive for system design. The MathWorks' MATLAB®/Simulink® simulation environment provides a powerful high level mathematical modeling environment for DSP systems that can be widely used for algorithm development and verification.

Active-HDL provides an interface to MATLAB® and Simulink® simulation environment, which allows co-simulation of functional blocks described by using mathematical formulas and behavioral models described by using hardware description languages. The interface delivered with the Active-HDL installation program allows you to select a module or entity that will be used as a black-box during the verification process performed within Simulink. It can be used in both VHDL and Verilog designs and interfaces to the MATLAB environment through the mlab_cosim.dll library ($ALDEC\Simulink). The Simulink Interface also provides users with the following benefits:

Elimination of the INOUT Port Declarations from the Top Level Interface

Simulink® currently does not support the concept of bidirectional (INOUT) ports on its’ blocks. For that reason if your top level component’s interface (either VHDL or Verilog) contains any inout ports you will have to convert them to unidirectional ports before proceeding with the co-simulation process. A portion of VHDL code example is shown below on how to do this.

Active-HDL provides the interface for The MathWorks' simulation tools, including:

The interface supports the following features:

In order to perform a first time interface setup in MATLAB, follow the configuration procedure described below:

Active-HDL Blockset has been installed successfully.

If waveforms within the HDL Black Box(s) are desired in Active HDL, i.e. those that don't show as outputs or inputs to a given a Black Box, simply open the Active-HDL Co-Sim block and click on the Script commands tab. Insert the desired waveform(s) with braces "{}" as shown with the wave command. 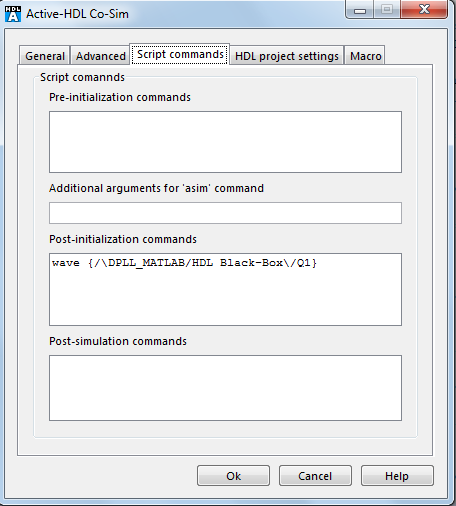 It is easy to obtain the parameters that follow the wave command by simply dragging the signal name to the command console in Active-HDL after simulation initialization. The signal name will appear with the appropriate path which is then copied and pasted as a Script command in the Post-initialization commands cell of the Active-HDL Co-Sim block as previously shown.

# Simulation has been initialized

Next article
Ask Us a Question
x
Ask Us a Question
x
Incorrect data entered.
Thank you! Your question has been submitted. Please allow 1-3 business days for someone to respond to your question.
Internal error occurred. Your question was not submitted. Please contact us using Feedback form.
We use cookies to ensure we give you the best user experience and to provide you with content we believe will be of relevance to you. If you continue to use our site, you consent to our use of cookies. A detailed overview on the use of cookies and other website information is located in our Privacy Policy.