How to Simulate Designs in Active-HDL

All these methods providing design stimuli can be combined in the same design. You can choose a method which is best suited for your specific design needs and be confident that a good balance between the time required to create simulation input and the complexity of the design verification exist.

The easiest way to create simulation stimuli is by adding the desired signals to the Waveform Editor and assigning stimulators that are available from the Stimulators option. There are several options to choose from. The following stimulator types are supported:

The Waveform Editor allows you to graphically edit any waveform by using dragging, copying, pasting and drawing new waveform signals. These waveforms can be used as custom stimulators by assigning them to the desired signals. Graphically edited waveforms can also be used as simulation input in conjunction with the TestBench Wizard, described later in this document, which generates a VHDL or Verilog test program that is based on the edited waveforms.

Waveform Editor also allows comparison of the simulation results. Signals for which the difference was detected are displayed in the Waveform Editor window with the red color. The icon

enabling the comparison of signals is located in the upper part of the window. The previous simulation run results must be first saved in the project folder. In case of indifferences in simulation runs an appropriate message is displayed.

Macros Entered in the Console Window

The simulation macro commands can be executed from a file, saving you time on the manual entry of every command in the Console window. Simulation macros not only can force input signals but they can also execute other commands in the Active-HDL environment. This allows complete automation of the design verification process, particularly when combined with other simulation entry methods. For example, you can write a script to run a number of simulations using several TestBench files, one after another. Macro scripts can execute external programs such as a synthesis program, batch files, etc. You can also invoke custom commands developed in Script Basic, which are included with Active-HDL, for automation purposes.

The HDL TestBench can provide simulation inputs and also test the design outputs. For example, you can create a VHDL or Verilog program that writes design outputs to a text file and compares it against a reference file having the expected values. This methodology provides the most robust design verification with minimum user interaction.

TestBench Created with the TestBench Wizard

Creating TestBenches is a tedious process. The TestBench wizard automates this process by guiding you through the process. First, it asks you to select the top level design entity to be tested. Next, you need to enter the name of the waveform file with the desired input and output ports. After answering a few additional questions, the TestBench wizard gathers the necessary information and creates a template for the test program. You can edit the wizard-generated file; adding your own test scenario and additional inputs, if required. 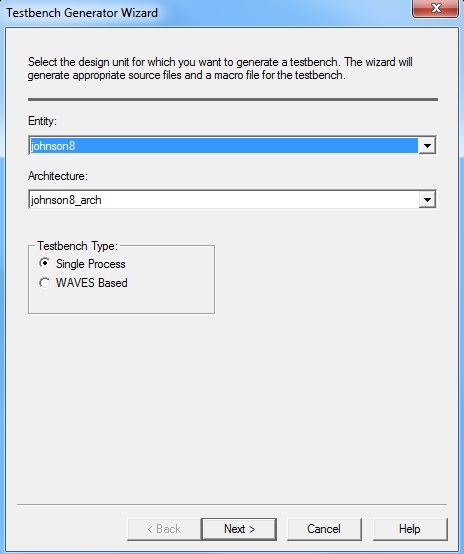 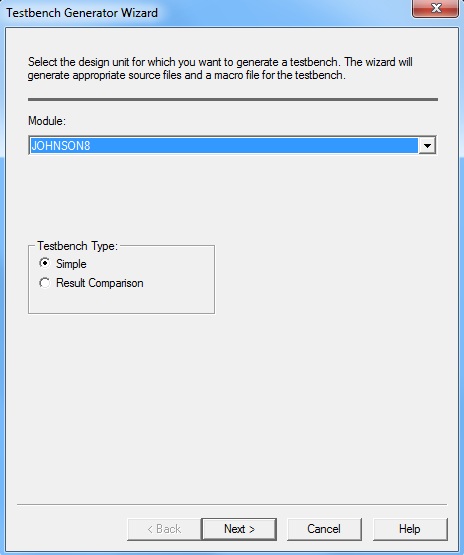 The TestBench wizard allows you to create a template compliant with the IEEE WAVES 1029.1 specification. WAVES is a specification for creating TestBench files in the VHDL language. It describes simulation inputs with a specific language implemented as a set of VHDL libraries. It supports verification and testing of hardware designs at any level of abstraction. You do not have to be familiar with the WAVES specification to create these files. If you select this option, the TestBench Wizard will automatically format your TestBench program using the WAVES specification. The main benefit of using this format is the ability to format simulation input and output files so that they can be used interchangeably between various simulators. The WAVES format also contains some very useful high level functions for comparing simulation outputs without writing a lot of VHDL code. The standard TestBench functions are provided in a compiled WAVES library and allow reading and writing of TestBench files in the WAVES format.

The difference between the WAVES TestBench and other TestBench files are:

HDL TestBench Created by the User

The VHDL or Verilog TestBench that you create will be treated as one of the VHDL or Verilog files in the design. You can import existing TestBench files and create the new ones from scratch. There are some VHDL packages provided in Active-HDL that include TestBench functions. The Language Assistant provides some examples of using simulation specific VHDL and Verilog constructs. For more information about writing your own simulation TestBench please refer to the VHDL and Verilog literature. Some of the more useful titles are listed at the end of this document.

As demonstrated in this chapter, Active-HDL provides a variety of methodologies for stimulating designs. For optimal results, use the most appropriate type of stimulator for each design stage. In the beginning of the design cycle you may want to use interactive stimulators to quickly create simulation inputs and view the design responses instantly. As you develop a better plan for testing your design, you may want to convert the stimulators to a VHDL or Verilog TestBench using the TestBench wizard. You can add to it any additional VHDL or Verilog test functions you may desire. At the end you can add some simulation scripts to automate the verification process and invoke your TestBench in the batch mode along with other design tasks such as synthesis, implementation and for the comparison of results from different design stages. For more detailed information how to create simulation inputs, please refer to the on-line documentation in Active-HDL.