Taking into account the constantly growing requirements for image data resolution used by both image data producers (e.g. CMOS image sensors, live online video streams) and display panels, 4K UltraHD imaging (2160p) de facto became a standard for today. Nowadays, the applications include but not limited to consumer electronics, medical, automotive and professional A/V broadcast and is getting even wider. While specialized desktop solutions have enough processing power to overcome UltraHD image computations, especially with access to cloud data services, it still can be challenging when it takes to embedded edge processing, particularly when low power consumption must be considered.

Aldec meets this challenge with its Zynq UltraScale+ MPSoC-based TySOM-3-ZU7EV prototyping board, which contains all the necessary connectivity and processing power to acquire, process and display the high-resolution 4K image data up to 60 FPS data rate.

Aldec clients do not have to choose between network channel bandwidth and image data quality, since 4K processing bundle already satisfies both of these requirements, providing two separate Linux-based solutions which are focused on two different types of image broadcasting: 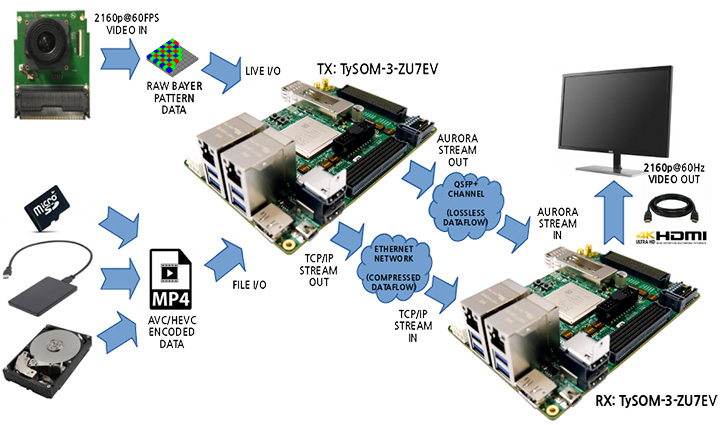 Each of those solutions contains also a special single board version, where image data is simply running from image source (e.g. 4K-capable camera) to a display (HDMI or DP) connected to the same TySOM board.

The main goal of this project is to demonstrate the ability to transmit untouched high-bandwidth image data between the source and destination devices using a high-speed QSFP+ connection, backed by on-board QSFP+ peripheral connectivity and on-chip serial transceivers leveraging the high-speed point-to-point Xilinx’ Aurora communication protocol. According to the internal pixel data representation, the result bandwidth for 2160p@60Hz data rate is about 1 GB/s, which is unreachable requirement for widely used 1Gbit Ethernet.

Main hardware components and features used in the design: 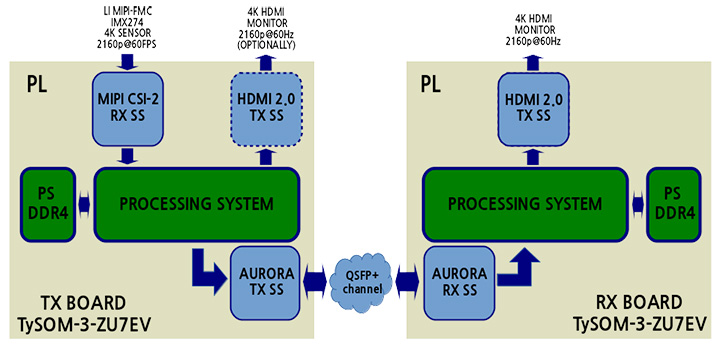 The board-to-board communication is done utilizing a low-level GT-based Aurora communication protocol, which allows to transmit large amounts of image data meeting low-latency and high data bandwidth requirements. Moreover, it also allows to reduce overall system cost by replacing the overpriced proprietary multi-gigabit Ethernet implementations, which are typically used for the high bandwidth data transferring. Similarly, to the single board version, the dataflow is under control of Linux user space application and each side has to be configured separately.

Unlike the raw image broadcast, encoded image data is better suited for transferring through industry standard Gigabit Ethernet networks. On-chip built-in VCU is responsible for video encoding and decoding memory-to-memory tasks, providing low bitrate and acceptable image quality. VCU supports both of the most popular video compression standards, such as H.264/AVC – Advanced Video Coding and H.265/HEVC – High Efficiency Video Coding up to 2160p@60 data rate. The whole image dataflow assumes the pixel data is represented in NV12 format, which is a two-plane version of YUV 4:2:0.

Main hardware components and features used in the design:

** Mali GPU is used in singleboard GUI version with DP display only.

There are six predefined presets used to configure VCU encoder and decoder hardware: AVC (Low, Medium, High) and HEVC (Low, Medium, High), where the target bitrates are 10/30/60 Mbit/s accordingly for Low/Medium/High for both AVC and HEVC standards. The rest part of compression settings (e.g. Profile, Rate control, GoP etc.) is the same for all the used presets. 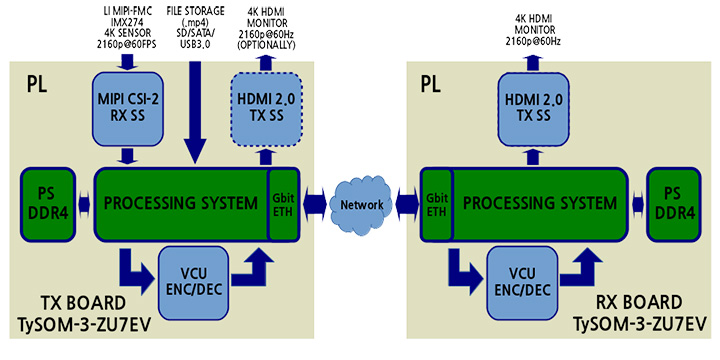 Motion detection is a critical element for object detection in ADAS and video processing applications. There are many methods to find moving objects in a video. One of the most reliable ones is optical flow. To make the developing process easier for TySOM users, Aldec has added the optical flow to the 4K Imaging reference design which highlights the moving objects in a live 4K videos. The hardware setup for this demo is the same as 4K imaging demo explained above.