IoT is a very broad term and the whole IoT world can be divided in three main layers:

Aldec provides FPGA-based solutions for the Gateway and Services layers of IoT infrastructure.

TySOM embedded development boards are qualified by AWS to run AWS IoT Greengrass. AWS IoT Greengrass expands the AWS features to the edge devices by enabling them to take actions on the data generated by the IoT devices and still using management, analytics, and durable storage. IoT Greengrass enables the connected devices to run AWS Lambda functions, Docker containers, and communicate with other devices securely even if they are not connected to the cloud system. In addition, AWS IoT Greengrass keeps device’s data sync and executes predictions based on machine learning models. It can be programmed to filter device data, manage the life cycle of that data and only transmit the necessary information back to AWS.

TySOM embedded development boards have passed the requirement tests for AWS IoT Greengrass. TySOM users will be provided with the required HW and SW to kickoff their IoT applications using AWS Greengrass..

TySOM boards can be used either as the main edge processing device or a gateway to AWS cloud. AWS IoT Greengrass core extends the cloud capabilities to TySOM board. It enables TySOM board to connect with devices in an IoT system, run Lambda functions, synch and secure the communications among devices even if it’s not connected to the Internet / Cloud. Aldec is here to help your engineers with their IoT applications. 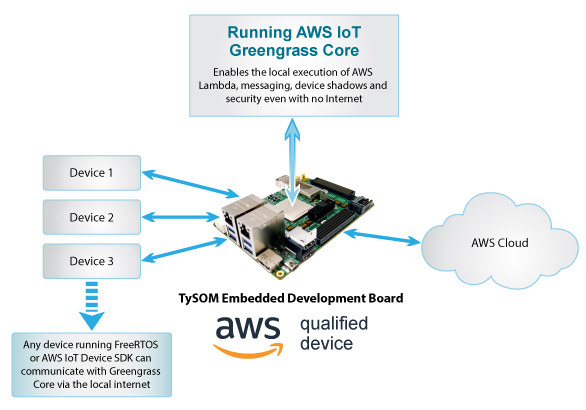 TySOM boards support a wide range of peripherals that can be used for IoT applications such as USB 3.0, 2.0, Pmod, HDMI, mPCIe and many more. In addition, a portfolio of FMC daughter cards can expand the peripherals on the main board to what you need. For more information on AWS IoT Greengrass solution please contact us.

Based on the TySOM board, Aldec delivers an IoT Gateway reference design developed using Xilinx Zynq FPGA. The TySOM Gateway runs on the core of embedded Linux used as a host that provides Internet LAN or WAN (wired or WiFi connection) and handles cloud protocols designated for IoT applications such as MQTT protocol used by the Amazon Cloud (AWS). On the other side the TySOM gateway supports multiple wireless and wired protocols used to build Personal Area Networks (PAN) comprising of Edge layer devices. Currently the supported protocols include Bluetooth, Z-wave, ZigBee, WiFi and USB.

Additionally the Xilinx Zynq device used on TySOM boards is powerful enough to implement advanced processing algorithms on the data collected from the Edge. The data can be filtered, compressed or encrypted before sending to the cloud so the TySOM gateway is not just a simple traffic router but an advanced device which allows to optimize costs of IoT Cloud and Services and handle hundreds of Edge nodes in an organization. The TySOM Gateway also includes an Android end-user application and web server examples that can be used to access and control Edge nodes directly from the TySOM board. 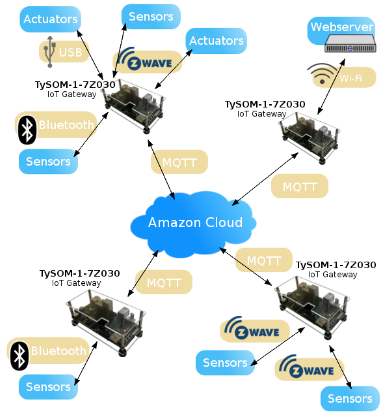 IoT Services and Cloud providers face a big challenge of enormous amount of data storage, management and processing. They have to provide reliable and responsive solutions to the end users, application developers and to billions of devices (the things) interconnected. Machine to Machine (M2M) communication should take fraction of second which imposes a huge demand on network infrastructure innovations and rises the bars for servers efficiency. At the same time power consumption must be minimized. This is why IoT service providers like Amazon or Google open up for new technologies to construct turbo-processors that accelerate data processing algorithms running on the servers. The FPGA technology is often chosen for its computation potential and power efficiency.